Originally from Canada, Cam graduated with honours in trombone performance from the University of British Columbia, Vancouver. He obtained a Masters Degree from SUNY Purchase College, NY in Studio Composition.

His work as an educator reflects his wide range of musical experience and expertise – music performance (jazz and classical), improvisation, composition, electro/acoustic recording, music history and appreciation, and sound design. Cam was a busy adjunct professor at Shepherd University in Shepherdstown, WV, and has also taught music at other colleges in Canada and the US, at private schools, and as a guest clinician and lecturer at many public schools in both Canada and the US.

As a composer and arranger, Cam has written music for a wide variety of musical ensembles from jazz big band to classical chamber ensembles, as well as collaborating with many film makers, modern dance choreographers, and mulit-media artists. He leads the local horn-driven ensemble “The Weather People”.

Meet Our Other Fantastic Music Teachers: 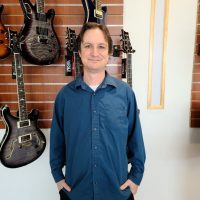