Wild About Woodwinds? All About the Alto Saxophone

Did you know that Kenny G., a famous alto saxophone player, has sold at least 75 million records? This versatile musician plays multiple instruments, and even though, at times, his critics can be pretty harsh, there’s no denying that he created a signature sound with his music.

For people interested in woodwind instruments, the saxophone is an excellent choice. It’s a versatile instrument that can create fantastic music solo or blend in with a group to give the music some extra soul.

If you’re trying to decide whether saxophone lessons are right for you, keep reading to learn about this jazzy instrument.

All About the Saxophone

The saxophone wasn’t invented until the 1840s. It was patented by Adolphe Sax in 1846. He was a Belgian instrument maker and musician.

These instruments are typically made with brass and played using a single-reed mouthpiece. This instrument can get used in rock and roll, contemporary music, marching bands, and classical and is most notoriously known for being used in jazz and big band music.

Before inventing the saxophone, Adolphe studied clarinet and flute. He attended the Brussels Conservatory of Music. The love of music was passed down through the generations as Sax was an apprentice in his father’s shop, where he also made musical instruments.

He began to experiment with the bass clarinet. He created a design that combined brass and woodwind to make a saxophone.

However, his vision of this instrument was far from narrow. His original patent included 14 different versions of the saxophone. There were two groups that ranged from F contrabass all the way to Eb sopranino.

Most of today’s saxophones come from the Bb and Eb pitch series.

The nine that are in use today include:

We’ll touch on the four most common.

The soprano sax is generally straight, but some manufacturers are known to make curved ones that look like small altos. This is the lightest and highest-pitched of the four most common saxophones.

It’s a B flat instrument, and if you misplay it, you will hear a piecing noise with a nasal quality. The soprano sax is challenging when it comes to breath control and intonation compared to the tenor and alto.

One famous soprano sax player is John Coltrane. He used this instrument in his album My Favorite Things. His version of this Sound of Music favorite brought the song to life in an entertaining way and increased the popularity of the soprano sax.

The alto sax is an E-flat instrument. The pitch is higher than the tenor sax but lower than the soprano sax. This is the most commonly used saxophone today.

It’s also the best one for beginners to learn how to play saxophone on. Charlie Parker is a well-known alto sax player. He is known for changing the course of music.

He ushered in the era of bebop jazz in the mid-1940s. His music inspired generations of musicians to come.

The tenor saxophone is bigger and deeper than the alto saxophone. It’s a B flat instrument with the same playing range as the alto, from low B flat to high F sharp.

This instrument commonly gets used in military bands, rock, pop, concert bands, jazz, and ska. Coleman Hawkins was a swing-era saxophone player who played the tenor as a jazz instrument in the 1920s and 1930s.

His music helped create space for other musicians who would light up the big band era. John Coltrane was also known for playing the tenor sax.

Most modern baritone saxes go all the way down to a low A. This saxophone is excellent for big bands, military bands, classical saxophone quartets, and concert bands. However, if bands aren’t your scene, this sax is also great for funk, soul, and Motown horn sections.

You won’t see the baritone sax often played as a jazz solo instrument. However, there are exceptions. If you want to look at solo uses of the baritone sax, check out Gerry Mulligan or Pepper Adams.

You can also hear these instruments in an Afro-beat artist’s band, Fela Kuti.

Are you wondering who some of the musicians we mentioned are? Younger generations might be less familiar with some of the names we threw around.

However, the saxophone is still a widely used instrument that can jazz up some of your favorite music. Wondering about songs you might love playing on the saxophone? Check out this Dance Monkey street solo.

However, that’s not it. The saxophone has been making a comeback in pop music. Lady Gaga’s, The Edge of Glory uses a saxophone player from the E Street Band, Clarence Clemons.

In addition, Katy Perry’s, Last Friday Night uses a saxophone played by Lenny Picket from Tower of Power. A few other artists and groups that have used the sax in their music include:

Those names should tell you just how versatile this instrument is. If you’re looking for the perfect woodwind, it might be the right choice.

Are you ready to pick up a new hobby you will love? Starting with the alto saxophone is an excellent choice when learning to play this loved instrument.

We’re here for you if you’re ready to start your woodwind lessons. Contact us today and get jazzy.

Music Production for Kids: How & Why to get Started

When kids receive music education, they’re able to quickly develop language skills and boost test scores.  Creativity, in any form, is crucial for child development. Being …

Any electric guitar player knows they also need an amplifier if they want anyone to hear what they’re playing. There are different kinds of guitar … 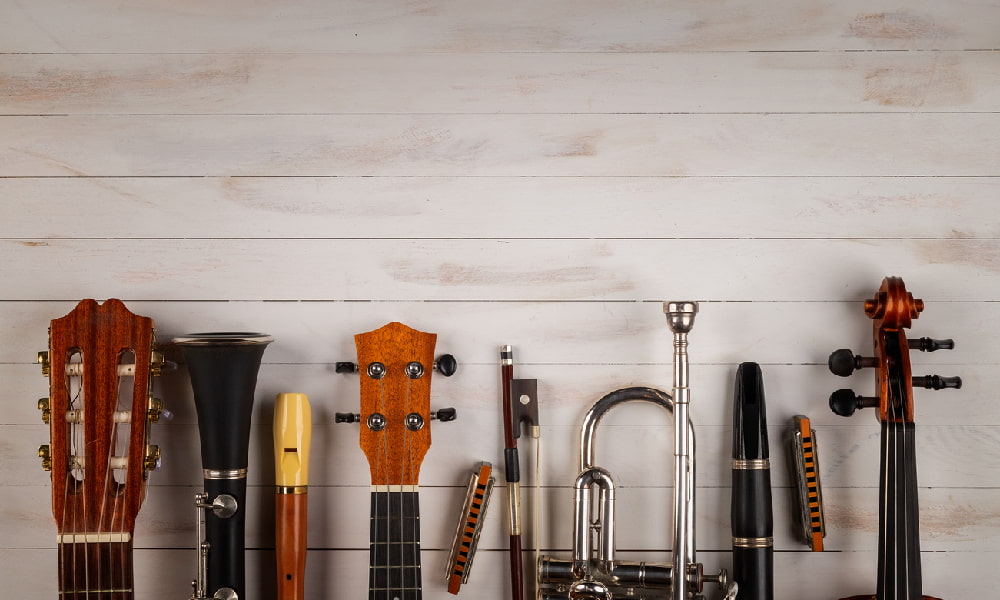 Introduction to the Pitch Range of Musical Instruments

Giving a music student a deeper understanding of what a note actually is can often unlock their curiosity and motivate them to learn more. Pitch …